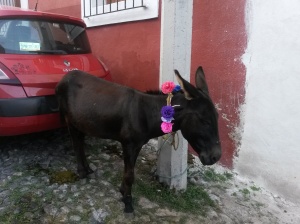 The burro, perhaps a more suitable method of conveyance than a car on the roads of San Miguel.

If you plan to drive in Mexico, you should know that while they drive on the same side of the road as we do in the U.S., and the laws are basically the same, owning and operating a car in this country has its challenges. They don’t do things the way we do, and it seems that you’re just supposed to know that, as I have yet to come across any driving manuals in print in either English or Spanish. For better or worse, a driver’s license issued by an American state grants you the privilege of driving on Mexican roads.

Highway driving can be especially nerve-wracking here. There are many divided highways that you might compare to our interstate system, and which are in great shape and easy to drive on. These roads typically require the payment of tolls, but after a few hours of driving behind chicken trucks, tractors, and cars clearly suffering from some automotive malady you welcome the chance to pay someone to drive on a better road.

But sometimes the only option is a two-lane highway, and there are some things you’d better know before you set out. For starters, know that the shoulder is not a place for you to pull over to check your GPS or text your friend that you’re on your way. Mexican drivers boldly pass other cars on the highway, and it seems that the double lines down the middle of the road are mere suggestions. To that end, it’s expected that if you’re approaching a blind curve, or if a car is coming towards you in your lane in an attempt to overtake another car, you will pull your car onto the shoulder to avoid a head-on collision. It’s perfectly fine, and again even expected, that you’ll continue on the shoulder at a high rate of speed. Knowing this, it might become apparent to you why road cycling is not a very popular sport in this country. 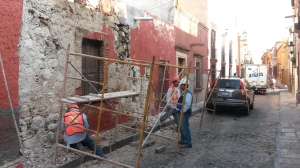 Just another construction project that extends well into the road.

You also don’t stop in the lane with your blinker on waiting to turn left across traffic when it’s clear, either. This would, after all, force those behind you to wait until you turned off the highway, and Mexican highway drivers don’t like to wait. So what do you do if you want to turn left? You get over onto the right shoulder and sit, with your left blinker on, until both lanes are clear and you can cross the road. I’ve heard it compared to the “jug-handle”, for you New Jersey drivers out there, without the helpful signage and actual road.

And while we’re on the subject of blinkers, know this: in many parts of Mexico, if you put your left blinker on while driving down the highway, it’s a message to the driver behind you that it’s safe to pass. You can imagine how THAT could get totally awkward if you thought you were signaling your intent to turn left and the guy behind you thought you were politely telling him to go around you, ON THE LEFT. Maybe disabling your blinkers in Mexico is an idea to consider.

Two lanes, plus parked cars. Sometimes you have to smear a little lube on your car to get it past another one.

San Miguel is a UNESCO World Heritage site, and the central historic section is more than 500 years old. The streets are paved with stones, and are oftentimes not much wider than the average compact car. At some point someone decided that signs would clutter the look of the place, so there are none. When approaching an intersection, it’s expected that drivers will treat it as a four-way stop. While on the surface it might seem that this could be chaos-inducing, it works very well, and I have seen very few accidents since moving here.

Driving a car in Mexico is not only hard on the driver, it’s hard on the car. There are man-eating potholes and random rocks sticking out almost anywhere you drive. Roadways drop away without warning, one-way streets aren’t marked and streets are built with pitches that would never be considered in the U.S. I know, because I live on one. Our car, by no means pristine when we arrived but without noticeable body damage, is now like Courtney Love: she’s got a few marks on her.

In San Miguel there is a level of courtesy afforded by most drivers that I have not seen elsewhere. One time in Cairo I was standing on the concrete island in the middle of a divided roadway waiting to cross the other half of the road. Somehow I dropped my purse, and I bent over to pick it up. As I stood up again I felt the whoosh of a taxi cab as it sped by me at an alarming rate of speed, with horn blaring. If I had still been bent over, my head extending into the roadway, there is no doubt I would have been decapitated, and not in a clean way like Marie Antoinette got. In Egypt, a horn is more of a here-I-come-and-I-WILL-run-over-you warning device.

Here there is less of an urgency about getting somewhere it seems, which I realize may not always be a good thing. But when you live in a 500 year-old city, you have to accept that for the garbage truck to pick up your garbage, it has to lumber its way down your narrow, one-lane street. And inevitably a line of cars forms behind it, and no one lays on their horn or extends their fist out the window and shouts obscenities. You’ll get there when you get there.

But woe betide you if your car has a mechanical failure in Mexico. Just before the New Year, the clutch went out on our car. While not a simple repair in the U.S., getting our car fixed in Mexico took on new dimensions of difficulty when we were told that our model of car is typically sold in this country with a six-speed transmission, not the five-speed that we have. Shipping an entire clutch assembly from the U.S. was prohibitively expensive, we were told, but having someone pick it up in Texas and drive it down would not be. So we called Audi of Dallas (not exactly the low price leader, but dependable) and had the part driven to San Miguel by a guy named Carlos, who apparently makes a living doing things like that. Unfortunately this meant that our car was out of commission for several weeks while all this got sorted out.

Our garage tucked behind a wall of dirt and a trench.

And now, ironically, we are well into the second week of a public works improvement project on our street that involves removing the water main that runs down the center of our street (one of the oldest in town, I’m told) and replacing it with new pipe. Seems like a good idea, as a couple of months back we woke up on a Saturday morning to a raging flood in the street courtesy of a broken pipe. But digging up a cobblestone street and putting it back together is kind of a big deal, and there is currently a two foot-wide trench down the middle, which is keeping our car snug in its garage. Since this started last Monday I’m averaging walking a little over nine and a half miles a day. Even with the 10% margin of error claimed by FitBit, that’s some considerable ground. I asked the stone mason working one street this morning how many more days he thought this would take, and he gave me the classic Mexican “maybe tomorrow” response, which was accompanied by a look that let me know plainly that he thought there was no way in hell they’d be done tomorrow. From the looks of things, I doubt it, but maybe walking is easier than driving after all.

2 thoughts on “She Drives Me Crazy”